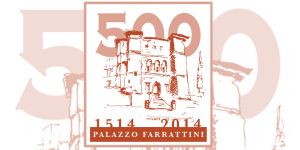 Logo of the 500 years celebration of Palazzo Farrattini

Erected in the green heart of Italy, in Umbria, a place that preserve strongly its medieval character and its attachment to nature, Palazzo Farrattini is located in Amelia. The town is sourrounded by the famous Polygonal Walls, so strong that resisted the attack of Emperor Federico Barbarossa.
The many archaeological finds found in the city and nearby might be seen in a very interesting Archaeological Museum.

History of the Facility 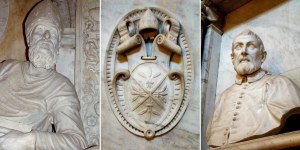 Built in 1514 by the will of Bartolomeo Farrattini II, Bishop of the Roman Curia, then Prefect of St. Peter’s Basilica. The project was entrusted to architect Antonio Da Sangallo. By that time Sangallo had succeded Bramante and Raffaello to the direction of the work of St. Peter’s Basilica. The importance of the Palazzo Farrattini is likely to be mentioned by Vasari in his “Lives of the Artists.” The palace in Amelia is the only work of Sangallo privately owned, and is still owned by the Farrattini family as their dynastic residence. 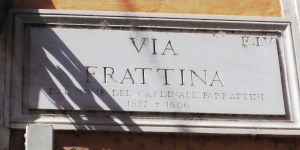 Is noteworthy to point out that Bartolomeo III built the Palazzo Farrattini located in Piazza di Spagna (Spanish Steps), in Rome. The street leading from the Piazza to Via del Corso is still known today by the name derived from Bartolomeo III, namely, Via Frattina.

Due to the impeccable and perfect maintenance, with the cooperation of the Umbria Film Commission, the Palace is a must for film productions.

The Building and Annexes 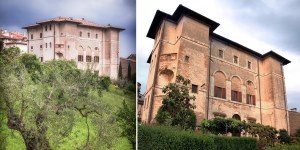 Stepping through the doorway and crossing the atrium, one looks out onto the garden and the olive groves that extend over an area of 10,000 square meters until they reach the polygonal wall, offering an unparalleled view of the Amerina countryside.
The original Renaissance floors display five centuries of history. 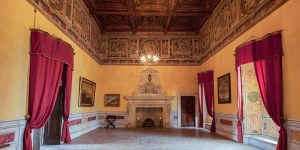 The Salon of Sangallo, with its pictorial cornice frieze, was completed for the marriage to Plantilla Pojani, which would bring as a dowry the fiefdom of Piediluco and the name which ever since has flanked that of the Farrattini Counts by papal dispensation. 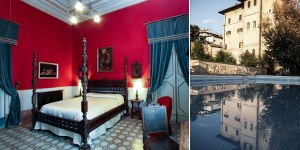 The piano nobile is composed of six other rooms including the Emperors chambre decorated with neoclassical grotesques painted on fabric. The Cardinal chambre, covered with an antique cloth of rose damask and boasting a rare chandelier of the seventeenth century. Then, the room dedicated to Catherine de’Medici, in memory of the role played by Bartolomeo II in the marriage between the niece of Pope Clement VII and Henry II, future king of France. 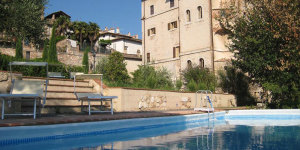 With an incredible panoramic view of the rolling hills of the Umbrian countryside, the swimming pool of Palazzo Farrattini provides a quite and pleasurable experience.

Surrounded by olive trees, laurel and rosemary, the pool area is also a pleasant spot to enjoy the fresh summer nights after visiting the beauty of Umbria.

Although extensive and monumental, the property, is in excellent condition.

The importance and charm of the Palace, the large areas, its location, along with he absolute versatility, make this property an attractive investment toward an accomodation facility. The uniqueness that sets this property makes it also a mansion perfect for official and institutional residences.

Message has been sent successfully.